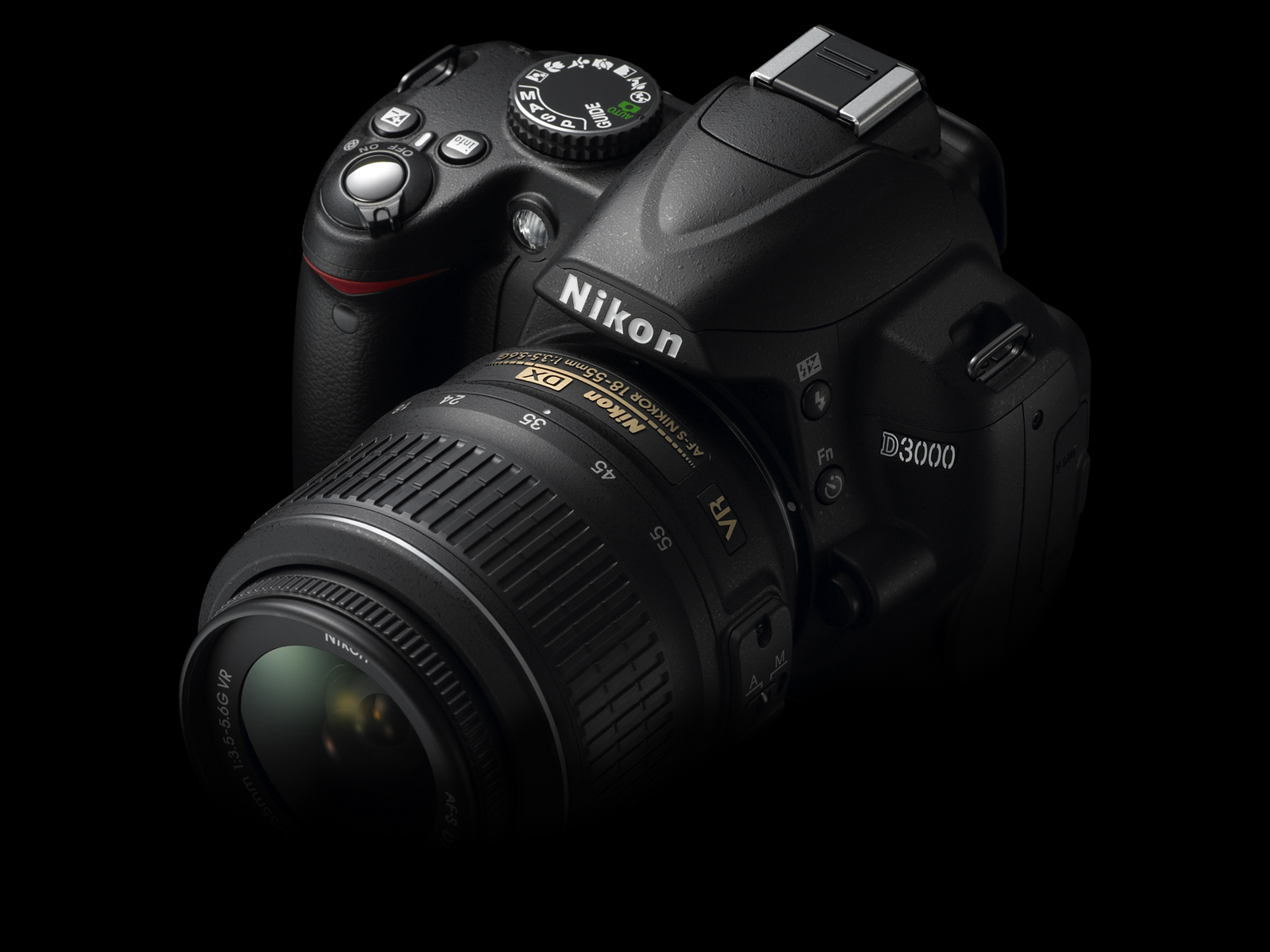 We continue the review of the camera Nikon 3000D.

Today we look at the camera body and design.

The D3000 fits firmly into the mold cast by Nikon’s first ‘true’ beginners DSLR, the D40. Its interface is relatively uncluttered compared to Nikon’s higher level offerings, and lacks the top plate mounted status LCD screen and secondary rear control dial of more expensive models like the D90 and D300s. In use, most of the D3000’s features are accessed via the 3in LCD screen on the rear of the camera. 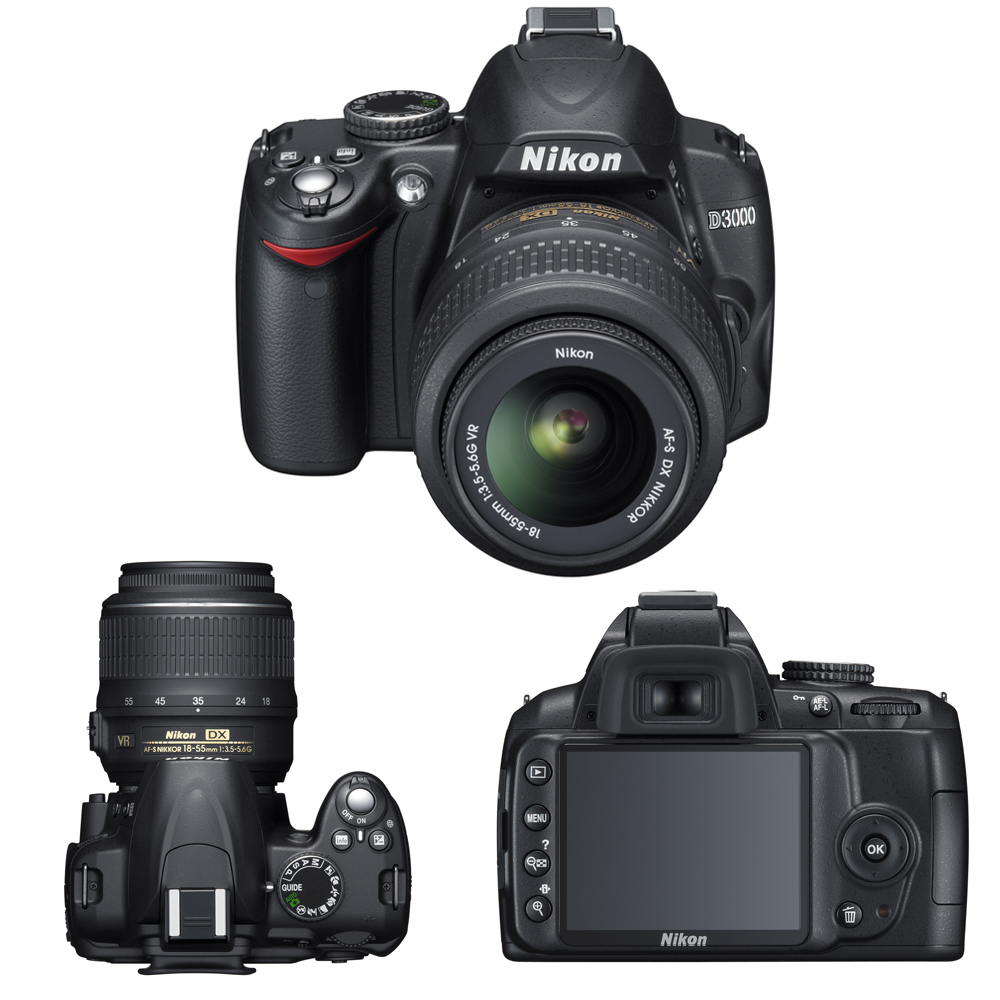 In terms of its size and overall design, the 3000D is a close cousin of the 5000D, which is only slightly larger as a result of its fold-out LCD screen. Ergonomically, the 5000D is the more ‘traditional’ camera, and offers more direct-access control points. The 3000D, like the D60, has a more screen-driven GUI. Canon’s EOS 1000D features a significantly more button-driven interface, which may appeal more to traditionalists.

Convenience is in your hand.

The D3000 is one of the smallest DSLRs currently on the market, but its small proportions belie a high standard of construction. Unlike some low-end cameras, there is no creak in any of the body seams of the D3000, and with the bundled 18-55mm optic mounted, the whole package feels solid and well-balanced. 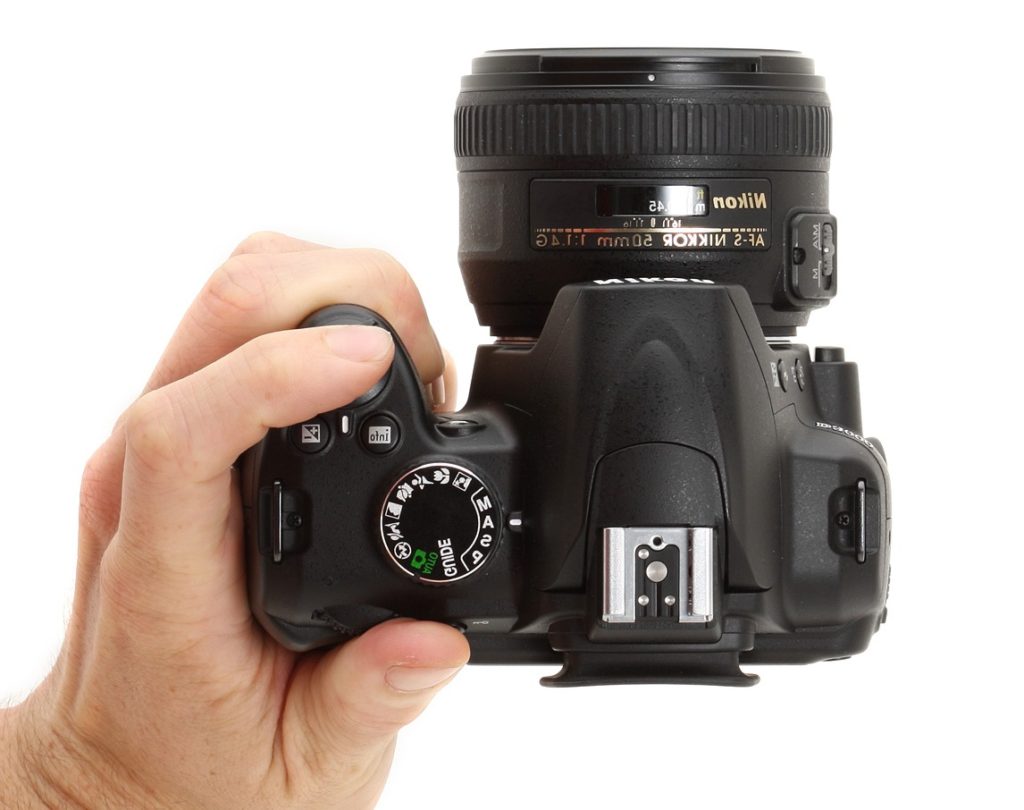 Naturally though, there is no getting around the fact that the D3000 is an entry-level DSLR, and the lightweight, all-plastic body shell doesn’t have the same heft as the D90 or D300s.

The LCD screen is slightly larger than that of the D5000 at 3in. Resolution 230,000 dots – the more expensive cameras model Nikon have 920,000 dot screens. As well as image review, it is via this screen that the majority of the D3000’s functionality is accessed, either from the camera’s menu screens, or the revamped graphic user interface. 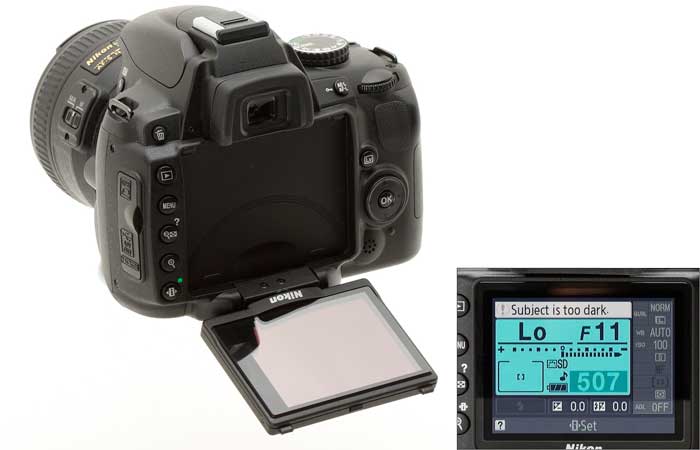 No live view or video mode. But myriad retouch options do allow for considerable control of image making post-capture.

Despite its relatively low resolution, the D3000 LCD screen is bright and clear, and the difference between 230,000 pixels and 920,000 is less pronounced in normal use than might be expected.

The difference becomes noticeable when zooming in to check critical focus, which is much easier with Nikon’s higher resolution screens.

The D3000 screen is given a relatively easy ride by the omission of live view mode. An ‘Auto dim’ function, which is turned on by default, turns down the intensity of the back light in poorly lit environments.

The viewfinder of this camera model is of the pentamirror type: 0.8x magnification and 95% coverage in each dimension. Grid lines can be superimposed on the focusing screen for ease of composition when shooting linear subjects. 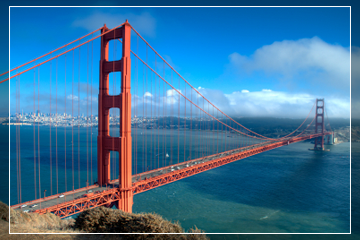 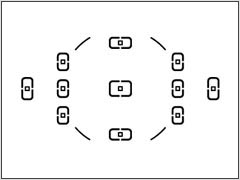 The focusing system of the D3000 is impressively advanced considering the camera’s entry-level. With 11 AF points in total, it is possible to use the D3000 in one of four modes – single-area AF, dynamic area AF, auto-area AF and 3D AF tracking. This last mode is borrowed from Nikon’s professional DSLRs and when activated, the D3000 uses subject color and distance information to track a subject across the AF array. 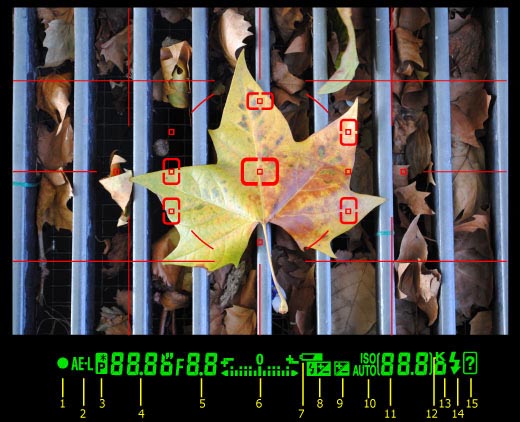 Entry-level DSLRs are equipped with fairly small, cramped viewfinders compared to their more advanced cameras. This is partly a result of their use of penta mirror’s rather than pentaprisms, which tend to produce a dimmer, and – because of size constraints – a smaller viewfinder image. The D3000 offers essentially the same viewfinder experience as the D5000, which in turn has a viewfinder typical of most cameras of this class.

Because of the way viewfinders are measured (using a fixed lens, rather than a lens of equivalent magnification), you also need to take the sensor size into account, so the numbers in the diagram below are the manufacturer’s specified magnifications divided by the respective ‘crop factors’. As you can see, the result is that the D3000 has a viewfinder a fraction smaller than the Canon EOS 500D but larger than the current entry-level Four-Thirds offering, the E-450. 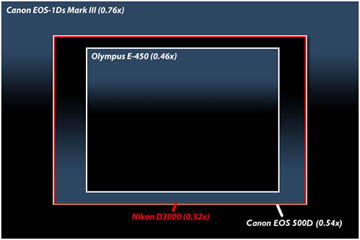 The diagram shows the relative size of the viewfinders of the Nikon D5000, the Canon EOS 500D, Olympus E-450 and – for reference – the EOS-1Ds Mark III (currently the biggest viewfinder on the DSLR market, fractionally larger than the Sony Alpha 900).

The Nikon D3000 viewfinder is slightly smaller than the Canon EOS 500D . Both are slightly larger than the E-450 viewfinder, thanks in part to the wider aspect ratio they use.

The Nikon D3000 shows approximately 95% of the scene to be captured. So-called ‘100%’ viewfinders are expensive to produce, and Nikon reserves them for the higher-level D300, D3s and D3x. The 5% ‘margin of error’ is of little consequence in normal use, but can make framing critical subjects difficult.

The camera uses the same EN-EL9a battery as the D5000, itself a revised version of the battery from the D40 and D60. It’s backwards compatible and can be used in the older cameras and with the same charger. The new EN-EL9a has a capacity of 7.2 volts and when used in the D3000, the battery should last for roughly 550 shots, assuming 50% flash use. 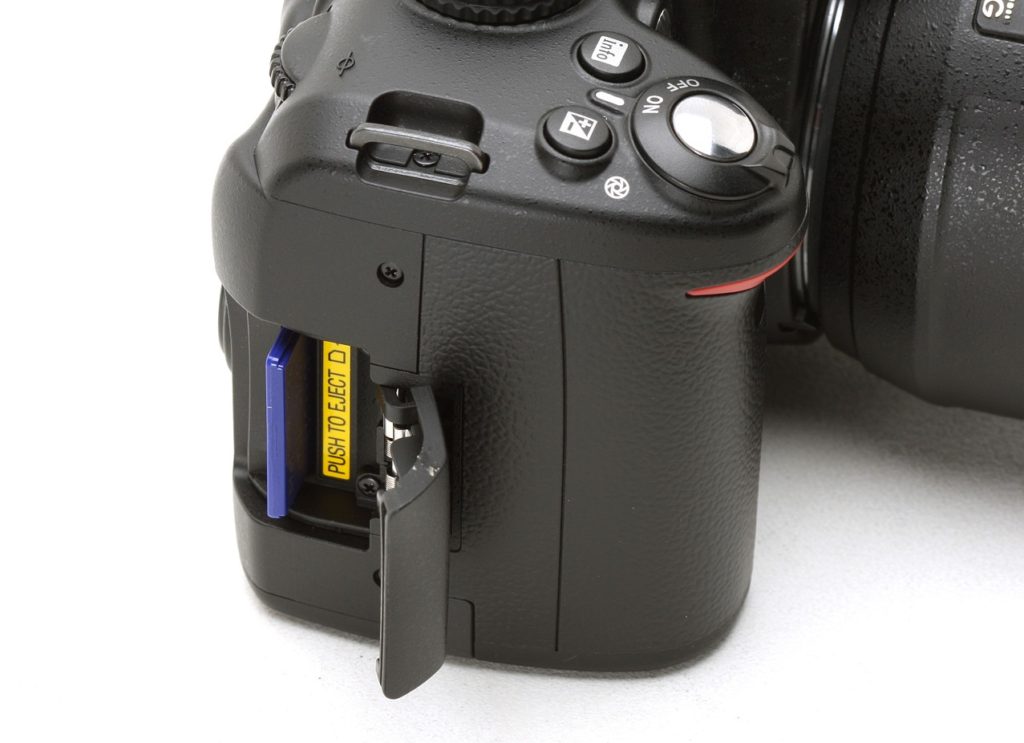 Just like the D5000 and D90, the card compartment of the D3000 is located on the outside of the grip, and operates on a sprung hinge. The bay accommodates a single SD (or SDHC) card, which is installed and removed by pushing it down into place.

As usual, manufacturers hide ports behind a rubber cover that fits snugly to the case when the ports are not in use and protect them from moisture and debris. 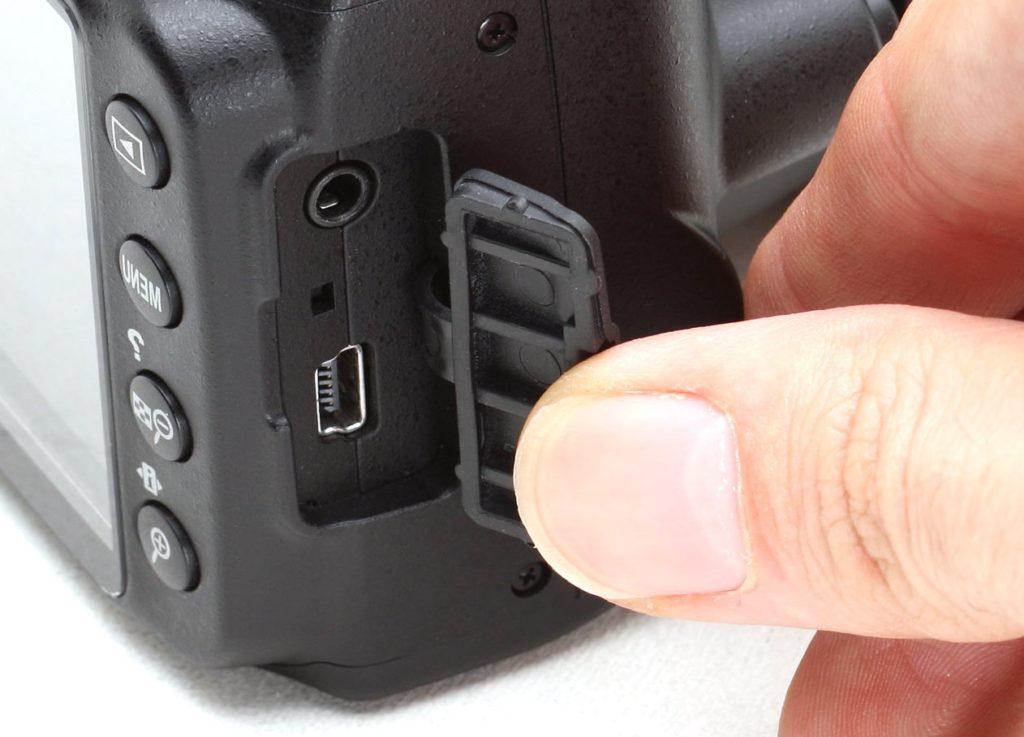 Camera Base and Tripod Mount.

A metal tripod socket is normally installed at the bottom of the camera body. It is located in the center on the axis of the lens. The base of the camera has a ribbed surface to increase grip with the tripod, but not rubberized. 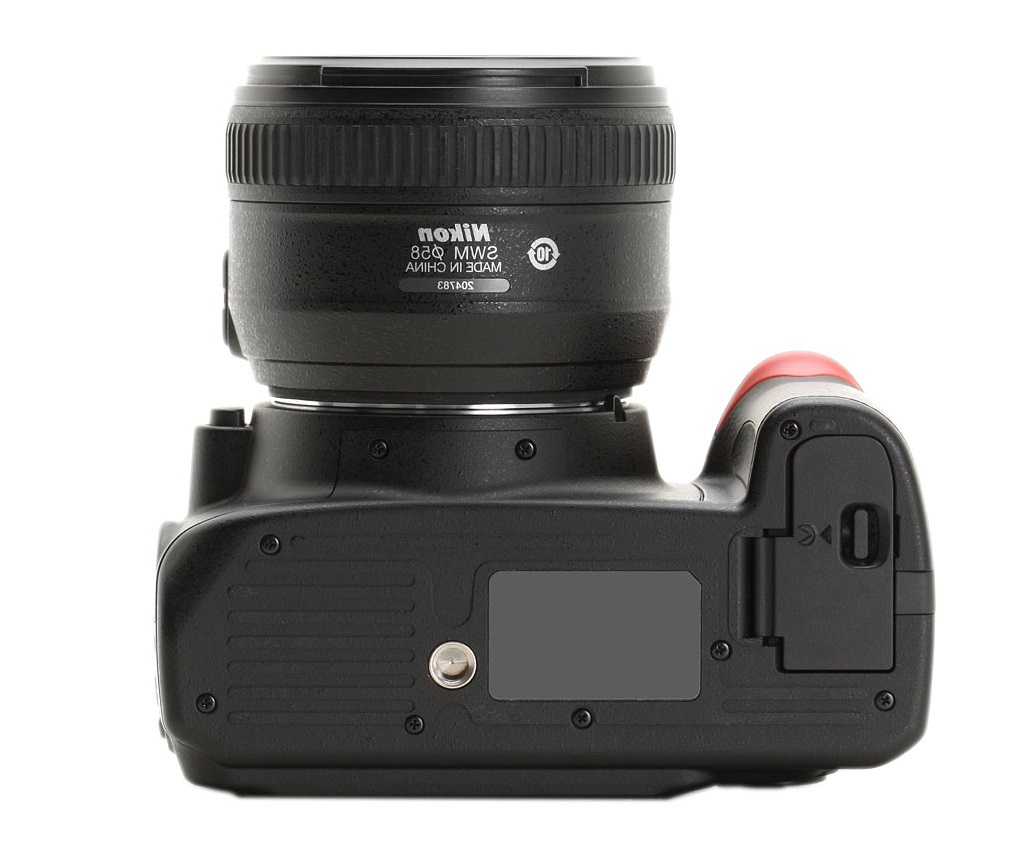 This camera model has an electronic-release pop-up flash which raises either automatically (in Auto or one of the relevant Scene modes) or manually by pressing the flash button. This button also doubles as the flash mode interface, and pressing it whilst moving the control dial scrolls through the available flash modes. Unlike the D90 and above, the D3000 cannot act as a controller for Nikon’s wireless ‘Creative Lighting System’ flash setup.

Lenses are inserted twisted clockwise and lock in place with an anticlockwise turn. Camera is no AF motor built into the body of the D3000, meaning only lenses with autofocus motors will focus automatically. All three major third-party lens makers (Sigma, Tamron and Tokina), now sell lenses with built-in AF motors for Nikon, but Nikon users with large collections of ‘legacy’ AF-D and earlier AF lenses will need to focus manually.

The D3000 has a self-cleaning sensor unit which works in the same way as the system built into the others Nikon`s model. By default, sensor cleaning is schedules for startup/shutdown and it can also be activated on demand.

Shutterstock Tax Forms for the 2018

How to take pictures on Android