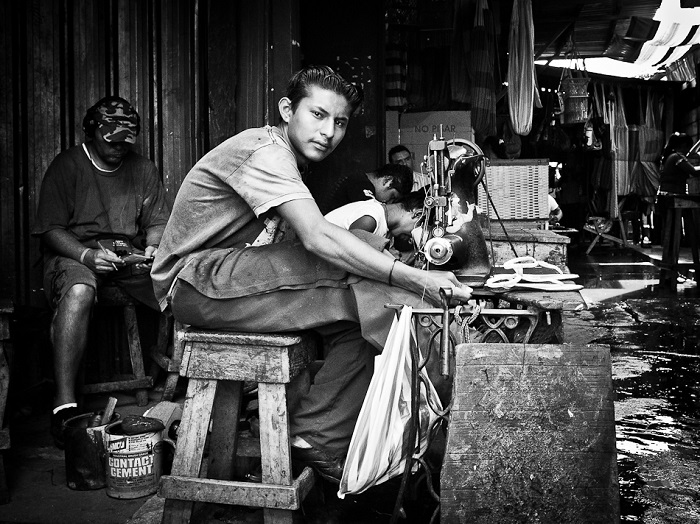 Throughout his life the Danish-American reporter Jacob Riis was a dedicated champion working to improve the quality of life for the poorest among New York population. He regularly described the squalid living conditions in shabby and degraded NY houses. In 1888 he convinced two amateur photographers to go for a walk about the tenements and take photos of what they would see. Later Riis learned to photograph himself. He used his images as illustrations in lectures and printed works; many of them were included in his book ‘How the other Half Lives’. The journalist was convinced that documentary photography was a far more potent weapon in the struggle for social reforms than the printed or even spoken word.

At the turn of the XX century Lewis Hine began to photograph immigrants flooding the United States. He visited cities’ slums, factories and works. The new magazines, that advocated social law-making, were attracted by Hine’s lofty humanism and willingly published his pictures. In 1908 Hine started a campaign against child labour. He secretly photographed children working in dank factory conditions, moved from one place to another and often drew hostility upon himself. The scope and expression of his images played a crucial role in the adoption of laws banning child labour. Riis and Hine’s photography had a definite current goal – to clearly show the desperate need of reforms – but its humanistic nature and vivid imagery secured a place in United States’ history.

At that time people started to organize themselves in different camera clubs and communities. They arranged exhibitions. The first expositions were to demonstrate scientific or technical improvements of the process and presented new products, paying no attention to the artistic aspect. But in 1893 a close photography circle in London put together a number of expositions with the aim of showing photographic pictures as pieces of art.

In the United States the cause was promoted by Alfred Stieglitz. He was born in the USA, but studied photography in Berlin and travelled a lot about Europe. Returning to the US in 1890, he continuously perfected his skills and experimented with chemicals and paper that others had discarded. He used a hand-held camera and often worked in very challenging conditions – sometimes in rain or snow – trying to make the most of himself and of photography, too. He saw it as a burgeoning art that could help the master make a statement, express an attitude. Stieglitz’ street life pictures conveyed the dynamics of the city, harmoniously blending lines and forms. Not content to continue on his own, Stieglitz shared his thoughts with other photographers, in his articles and lectures. He inspired people to do more, to conduct a creative search.

Stieglitz often had to deal with those who adamantly confronted his ideas. In 1901 he was invited to set up an artistic photography exhibition at the National Arts Club. Using the new opportunities, shortly before the opening Stieglitz announced a new community he called Photo-Secession. It was more of a movement rather than a formal society – an association for the like-minded people who believed photography’s place was among fine arts. Stieglitz was the uniting element in this new group, guided by the principles of Photo-Secession as declared by Stieglitz. He said that Photo-Secession was to bring together Americans interested in or practising pictorial photography, who would advocate photography as a full-fledged art form – not the assistant of art.

Works of secessionists on the walls of the National Arts Club demonstrated a certain degree of independence in choice of themes and artistic means. There was scenery, misty forests and meadows, downcast faces of beautiful women in flowing dresses; there was genre photography – pictures of peasants at work or captured in a moment of leisure. The tones were impressionistic: the dim light softened contours and blurred details “creating an impression”. Photography clearly echoed the general artistic trends.