«This is one of the famous old buildings in Hong Kong. It was filmed in Transformers 4: Age of Extinction.»

With an estimated population density of more than 69,500 people per square kilometer, Hong Kong has over 1300 skyscrapers, more than any city in the world by a long shot (New York City, which takes the #2 spot, has only 730). Some reports estimate only 200 square kilometers of flat land remain for new developments in Hong Kong, and as the population grows, people aren’t building outward; they’re building upward.

In the past few years, photographers from all over the world have flocked to this vertical metropolis in hopes of making unforgettable architectural shots. Shutterstock Contributor Leung Cho Pan, on the other hand, has lived there his whole life. He loves his home because it’s melting pot of cultures; booming financial centers and traditional Chinese-designed neighborhoods exist side-by-side. The history of Hong Kong can be read by looking at its buildings.

Cho Pan himself does not live in a skyscraper, but he’s inspired by the stories they tell with their shapes and lines. «I always want to present the compact life,» he tells us. Even if there are no people in his pictures, the human presence looms large. In each of these tiny grid-like facades, there are rows and columns of windows, and inside, men and women eat, work, sleep, and go about their daily lives.

Cho Pan doesn’t have a favorite building, but when it comes to architecture, he prefers simple forms and unique lines. For this, he says, the territory’s old public housing is perfect.

Mostly, the photographer says, he can find an interesting building and visit it without any trouble. Occasionally, a security guard will interfere, but usually, he has the freedom to explore. He has experimented with a drone, but he doesn’t own one yet, and the majority of his work is shot from nearby hills or neighboring buildings. «Most of the time,» he explains, «I can just walk right up.»

We asked Cho Pan to share some of his most astonishing photos of Hong Kong high-rises, shot during the day and at night, and he also shared some of his best tips for making photos here.

This is one of the famous old buildings in Hong Kong. It was filmed in Transformers 4: Age of Extinction.

The best way to shoot in these places is to keep a low profile. Don’t bring bulky gear or too many lenses. Otherwise, people will think you are taking photos for business purposes, and you will not be welcome.

I think the best time to shoot is late afternoon and night. In the afternoon, you will not have the harsh overhead sun, and at night, the lights from the buildings give you a whole different look.

Before the shooting, I check on Google Maps first so I know the direction of the buildings and where the light will be coming from.

I shot this photo from another apartment building.

It’s good to know the precise distance between the subject and the place where you’ll be standing. That way, you can prepare and choose the right lens to bring with you.

This is Twin Tower-type old public housing building in Hong Kong. I like its design very much.

Sometimes, a famous building will have already been photographed by other photographers, which means there are not many different angles to choose from. I’ve noticed that the shots of these buildings that sell the best are the ones taken from the most famous and recognizable angles.

See also: How To Photograph Steam 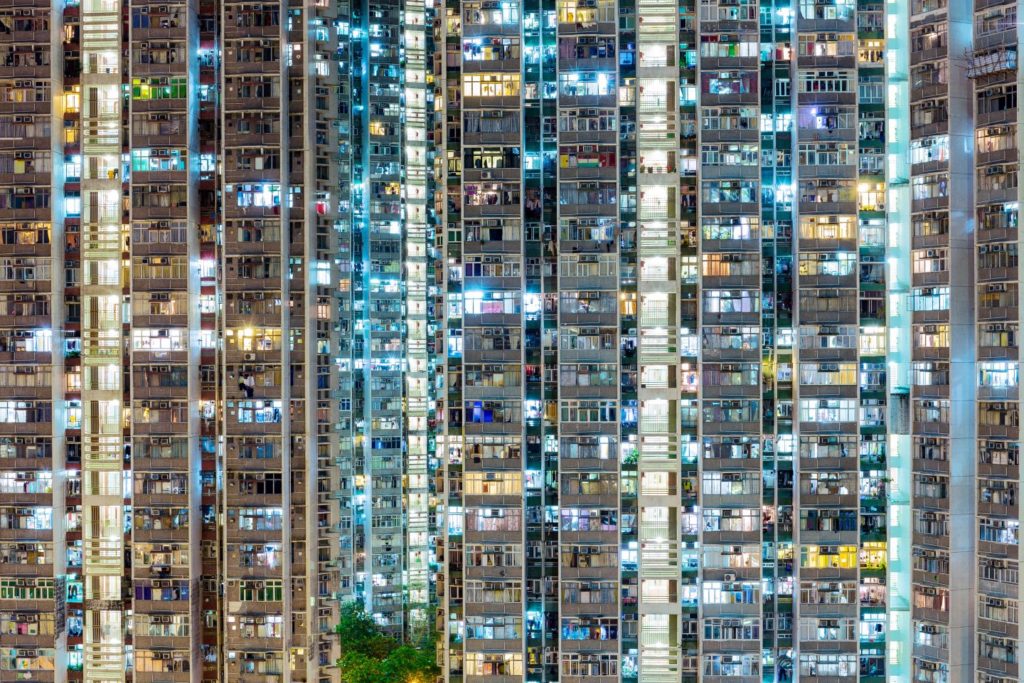